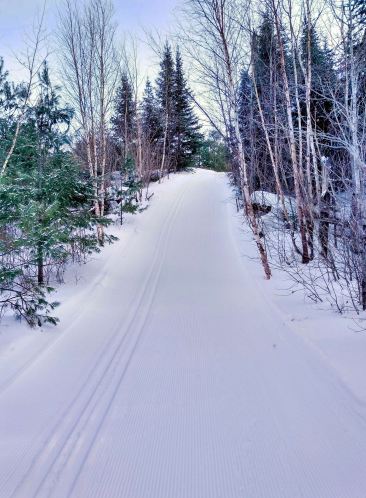 Skiing is excellent. We haven’t had any significant changes — small amounts of new snow, but no big dumps; no melting; frequent regular grooming to keep everything spiffed up, but no major overhauls. Just routine winter here.This hasn’t been a record-setting winter for snowfall, and at this point we’d like more snow because fresh snow is prettier and more fun to groom. But at some point more snow is just excess — we are in good shape.

We’ve had some crazy cold weather this year, as has most of the state.These have not been typical winter temperatures, so we’ve been very impressed by how unperturbed our skiers are by the cold. It has helped that many of our super-cold days were sunny, with minimal wind. We’re hoping that the worst of the cold is behind us now and that we’ll start to see a warm-up. The weekend forecast looks promising.

We also have a good forecast for possible Northern Lights this weekend. We’re in a cycle of fewer geo-magnetic storms now, which means the aurora will appear less often. There hasn’t been a fantastic light show for quite a while, but this weekend has some potential for a show, if it stays clear.